Every node A stores a table that represents the conditional probability of random variable A given every combination of values its parents could take.

From Conditional to Joint

In order to extract the joint distribution from the local conditionals, we can use the following formula:

Size of a Bayesian Network

In order to store a table that represents an ordinary joint distribution of N variables where each variable can take d values, one would need $O(d^N)$ entries which is too large.

One important advantage of Bayesian Networks is that they reduce this size needed to store a join distribution by storing different small parts from which we can reconstruct the joint distribution. Every node contains a table that determines its value for every combination of values of its parents. If we assume that every node has no more than k parents, this would mean that every node has a table of size $O(d^{k+1})$ ($k + 1$ comes from the fact that we encode the parents and the node itself), so for N nodes, we would get a total of $O(Nd^k)$, which is a reduction that depends on k, the maximum number of possible parents.

No, not all the time. It is easier to think of the graph as if it means that a certain variable (parent) is causing another variable (child), but that is not always the case. Rather, it only means that there is a direct conditional dependency between variables.

How to check for Independence in a Bayesian Networks

If two variables do not have a direct connection, this does not mean that they are independent, they might indirectly influence each other through other nodes.

For example in this graph below, A and B are not necessarily independent because they can influence each other through B.

Nevertheless, we can prove conditional independence of some cases. For example, in the network above, we can say that C is conditionally independent from A given B. The intuition is that since a value of B was given, it already holds the influence from A, or another way to think of it that the influence between A and C was blocked by B.

There are 3 types of simple 3-node graphs which are simple to analyze and will be used to detect properties in Bayesian Networks. These graphs are causal chains, common cause, and common effect.

From this structure we can only say that C is conditionally independent of A given B. (can be proven mathematically)

Here, we can say that B and C are independent given A. (can be proven mathematically)

Here, A and B are in fact fully independent, but they are not independent given C.

Detect if 2 nodes are conditionally independent from the graph structure 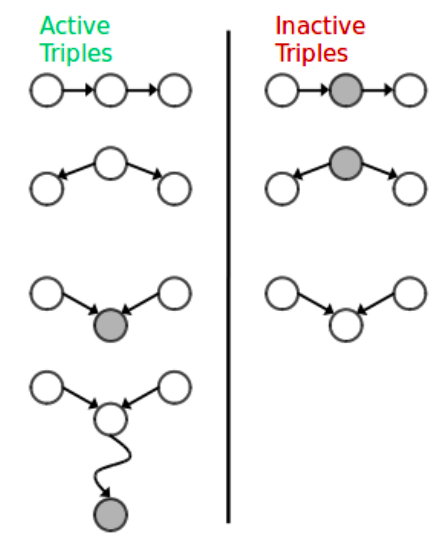 This approach is called D-Separation.

For a given node X, we can say that it is conditionally independent of all other nodes given its Markov Blanket. A Markove Blanket for a node consists of its parents, children, and children’s parents. Like in the image below. 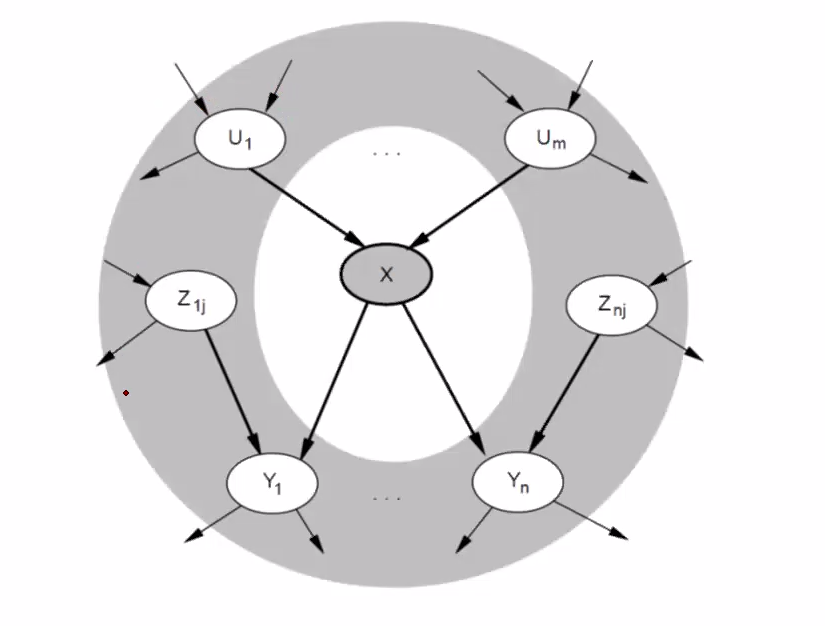 The act of calculating the probability that some random variables take certain values from a join distribution.

This is basically the brute force way of calculating a certain probability, where we first take the sum of the probabilities of all the hidden random variables to eliminate them, and then calculate the desired probability of the target and evidence.

Enumeration gives an exact answer but is exponential in complexity.

Steps of performing Inference by Enumeration

In enumeration, what we did was build the whole join distribution and then marginalize in order to reduce it to the desired state of target and evidence variables. The idea suggested by Variable Elimination to speed up the calculations is to interleave between joining and marginalizing. It basically remains exponential but it helps speed up the calculations compared to enumerations.

Factorization as a mathematical concept means to decompose an object into a product of other objects called factors.

For Bayesian Networks, let’s see what kind of factors there can be:

So now back to Variable Elimination, we will use 2 main operations, join and eleminate. Join operation basically joins two tables in a similar way to the database join operations. In simpler terms, if table A has two variables X and Y, and table B has two variables Y and Z, then a join operation would result in a 3 dimensional table of X, Y, and Z. where probability of an entry in table A is multiplied by the a probability of table B where the common variable Y values match. Eliminate operations is simply summing for all the values of a certain variable to remove it from the table.

Conclusion of Variable Elimination: The worst case complexity of Variable Elimination is not better than Enumeration in theory but in practice it is faster. This difference in speed is due to the fact that eliminating some variables in a certain order decreases the maximum factor generated, which affects the computations significantly if we were able to find a good ordering.

Since it takes too long to calculate exact inferences using the method discussed earlier, we may sacrifice some of the exactness in order to speed up the calculation. One method to do this is Sampling.

How to sample from a known distribution

Since it is a known distribution, then for each value the random variable takes we know its probability. Hence, we do the following steps:

To apply prior sampling on a Bayesian Network:

As $n$ goes to infinity, then the probabilities computer using Prior Sampling would converge to the exact original probabilities. This is why we call this sampling method consistent.

The idea in Rejection Sampling is simple, given a desired query with targets and evidence, for every sample we get, we reject it if it does not match our desired evidence. That is, if we want to collect $n$ samples, we keep drawing samples such that all the $n$ chosen samples have our evidence satisfied, so we might perform more than $n$ sampling operations to get $n$ samples which match our evidence. The number of sampling operations can be very high if our evidence is unlikely because we would reject many of the samples we get.

Rejection Sampling has a very serious limitation, which is the fact that many samples can be rejected if the evidence was unlikely. Likelihood Weighting solves this issue with the following steps:

Likelihood Weighting is consistent because the product of Sampling distribution that is a result of fixing evidence and the weight of every sample (which is an accumulated product of evidence variables given their parents) gives us the original join distribution (Mathematical equations to be added here later).

Note: After generating the samples, instead of counting the number of samples satisfying the target, we sum the weights instead. This is essential to produce a consistent answer.

Issues of Likelihood Weighting: Fixing the evidence affects the downstream variables (variables which are reachable from an evidence in the directed graph and come after it in the topological sorting), but it does not affect the upstream variables (variables which can reach the evidence in the directed graph and come before it in the topological sorting). this is bad because when fixing the evidence, all its downstream will be affected by its value but it would still follow the distribution. On the other hand, fixing the value of an evidence regardless of its parents values creates an inconsistency which we approximately solve by using the weight approach. Therefore, the larger the number of upstream variables, the less accurate the approximation is. Following this logic, we prefer evidences that exist at the top of the hierarchy rather than the bottom.

Approach to Generate a Single Sample:

This approach has the property that repeating it infinitely many times results in a sample that comes from the correct distribution. This way we also guarantee that both upstream and downstream variables are conditioned on evidence.

One might ask: How efficient is it to sample one variable conditioned on all the rest ? Well, the probability of a variable conditioned on all the rest is equal to the joint probability divided on the probability of all the rest. In this equation many terms would cancel out between the numerator and denominator. More specifically, all Conditional Probability Tables which do not contain the re-sampled variables will be canceled out. In other words, to re-sample a variable we simply join the tables that contain it and use them for the calculations, which can be faster if the local interactions in the Bayesian Network were limited.

Note: Sampling a variable given its Markov Blanket is enough.

As with the previous methods, once we have the samples, probabilities are computer by counting samples that match the target and divide by the number of samples (because they all match the evidence by definition). 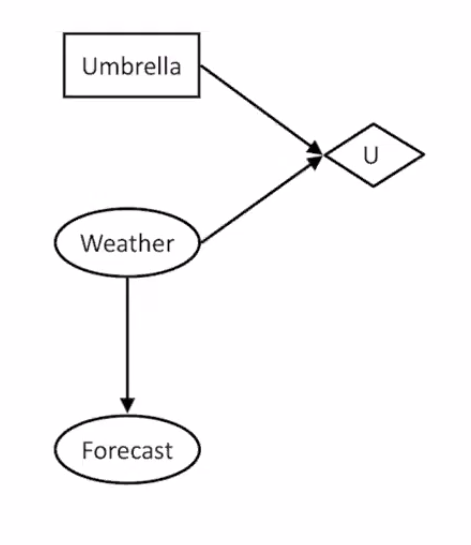 How to select an action in this network:

Finding the value of discovering new information or in the case of Bayesian Network adding new evidence values can help in deciding to which direction we must put effort in order to collect data. Therefore we attempt to calculate the Value of Information to guide our choices and decisions better.

How to calculate the Value of Information ?

How to calculate the Expected MEU after acquiring new evidence ?

Properties of Value of Information (VPI):

We can have some shortcuts in calculating VPO through some independence properties: